Back in 2014 when the Lego movie was released, it was met with huge approval from critics and a strong box office to back it up as well. In a year where Marvel worked their magic with Guardians of the Galaxy and a project with Spiderman flopped critically, Phil Lord & Chris Miller can look back now and appreciate how awesome everything turned out to be.

The LEGO Batman movie works out very well as an action-filled comedy with lots of cameos and easter eggs for both fans of the caped crusader and casual comic book readers to bask in. In the first act, it plays out as a buddy cop movie between Will Arnett’s Batman and Michael Cera’s Robin; something that resembles a Shane Black movie although this time Iron Man is not the hero, rather he’s reduced to a brief cameo role (in a wierd capacity).

The LEGO Batman movie mostly works out because of great voice work by Will Arnett (Batman), Michael Cera (Robin), Rosario Dawson (Barbara Gordon) and Ralph Phienes (Alfred) along with the rest of the heroes and villains and also apple’s own Siri playing Batman’s ‘puter.

The premise is simple really. Batman raps his own theme song at the beginning of the movie which (thankfully) can now be found online while defeating Joker and the rest of his rogue gallery. Batman then finds time to lament on the life that would have been had his parents not died on crime alley; something we’ve seen far too often, but just looks and feels better in LEGO form. Alfred is seen trying to get him a life, friends and family to which Batman shuts him down candidly by letting him know he never had a family. Alfred then tells him he hasn’t been himself ever since his parents demise by quick flashbacks and awesome easter eggs. From last years critical flop BvS to critical charms like Nolan’s Dark Knight trilogy and then via live action form of George Clooney’s Bat nipples to Adam West dancing in the 1966 movie.

After all the brooding we see Batman attend Commissioner Gordon’s retirement where his daughter Barbara is to take over. Bruce immediately falls in love and while being distracted, inadvertently adopts Robin, who claims Bruce is the “greatest orphan ever” and is a fan. Bruce’s love turns cold when Barbara chooses to work with Batman under the law rather than let him prowl around unsupervised as a vigilante.

Joker  (Zach Galifianakis), learns of the phantom zone and how Superman (Channing Tatum) sends his toughest villains like Zod (one may say seth Grahame-Smith was not a fan of how his demise was handled in Man of Steel) there as punishment. Joker then sees this as a way to get himself there and bring all the great villains to Gotham, though this is not said at the time. After he manages to get himself to the phantom zone through a clever trick by everyone’s favourite Arkham patient Harley Quinn, he brings them back to Gotham and then in the finale he requests that Batman acknowledges him as his greatest villain whilst telling Batman that he has never once said he hates him. It’s one of those scenes that won’t even work in a deadpool movie.

The LEGO batman movie was able to get away with many things like Dumbledore and King Kong making an appearance and Batman being told by the brick that scans every villain at the Phantom Zone gate looking to see if their evil or not that he’s neither good nor bad while showing him clips of every bad thing he’s done in the movie up to that point including asking Robin if he’s 110% expendable. You can’t imagine in the DCEU; even if they decide to do a Tower of Babel adaptation that someone would go as far to claim Batman is an anti-hero, much more a villain.

The movie drops the archaic storytelling of it’s titular hero and continues in the formula of it’s predecessor with rich storytelling and a bevy of characters from all corners of film and media. Seth Grahame-Smith wrote the screenplay and was to direct another Warner property in The Flash but dropped out unceremoniously. With his comedic chops and artistic story telling on show here, only time will tell if it was a mistake to let him go. 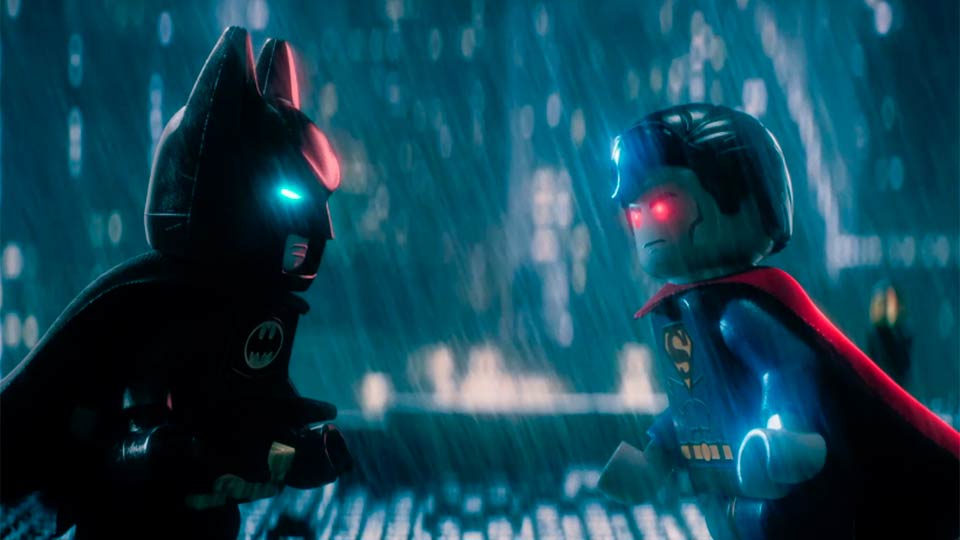 Perhaps one downside to the movie was the lack of acknowledgement from Superman that a highly guarded weapon like a phantom zone machine went missing or rather stolen in acrobatic fashion by Robin and he didn’t notice even after having a 57th Justice League celebration with all the other league members. Except Batman….because he wasn’t invited. At least there’ll be more reason to fight here than the one given in BvS.

In a time where Warner Bros. other properties both on the big and small screen are neither here nor there in terms of fans devotion, The LEGO Batman movie is one not just fans but kids, adults, casual movie goers and even Marvel fans can enjoy.